This is the time to be part of Scotland's story 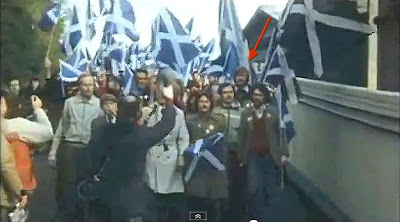 In 1979, I was a third-year student and an ardent supporter of Scottish Independence. The first ever constitutional referendum for Scotland was imminent and the Yes campaign was marshalling its resources, such as they were, to fight a No campaign which included practically every political party and institution in the country and many based elsewhere.

The few opinion polls which existed then were ambiguous, but seemed to show a Yes vote would be unlikely. The Westminster government (then Labour led) was interfering with the referendum process to make a positive outcome almost impossible. And the Tories were promising jam tomorrow – just as long as we behaved ourselves and voted No. We all know how that turned out.

A march in support of the Yes campaign was organised in Edinburgh that Spring. Thousands of people massed on Calton Hill to hear the speeches and enjoy the atmosphere. Then a band of 71, one representing each constituency in Scotland (yes, really – 71) marched down towards the Royal high School where the new Scottish Assembly was to be housed. Each of us bore a Saltire and we marched in silence, eventually sitting on the ground in front of the empty school.

As we reached the bottom of the hill, we were greeted by a solid wall of cheering as thousands of suporters were waiting for us to appear. I was at the front of the line, proudly striding alongside Billy Wolfe who was then the leader of the SNP. The cameras were out and we all featured in the small number of news broadcasts that evening. That was one of the proudest days of my young life.

Nowadays, every time someone makes up a montage from 1979, or creates a retrospective on Independence or Scottish nationalism, there is a good chance that my 20 year old self will appear on screen again, my red beard (grown specially for the occasion) making me look like I just came down from the hills for the day. And each time, I am taken back to that campaign, and to that day.

On Saturday 22nd of September, we will all have the opportunity to take part in the first of three annual Marches for Independence in Edinburgh. Those who attend, seasoned campaigners and neophytes alike, will remember that they were there for the rest of their lives. Win or lose in 2014, and I am supremely confident that we shall win, each person marching will become a part of Scotland's history.

Then, if we achieve our independence at this attempt, or even at the next, each will look back on the experience and think, “I was there that day. I was a part of all that. And just look at the nation we managed to build because of it.”

Don't miss your chance to become part of Scotland's story. Get to Edinburgh this Saturday, if you possibly can, and take part in the march. Create your own memories of the day, and be careful not to wipe them out again at the after party in Espionage.

But most of all, just be a part of it.