Independent Thought in the "Better No" Campaign? 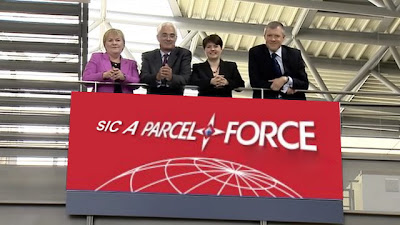 The independence debate appears to be cautiously entering a new phase as the battle lines drawn between the pro- and anti-independence political parties begin to blur.


Before the last Holyrood elections, the minority SNP administration tried to host an independence referendum, but were prevented from doing so by a wall of opposition from each of the three London-based political parties. Labour, Tories and LibDems were united in their view that Scots must not be asked their views on the constitutional future of their country.

When the SNP gained a majority in the Scottish Parliament in 2011, the opposition of the anti-referendum parties became ineffective and the Holyrood government promised a referendum would be held in the second half of the parliamentary term.


The three unionist parties U-turned faster than Wiley E Coyote approaching a cliff edge, and began to call for the referendum to be held immediately in a reprise of Wendy Alexander's “bring it on” speech which, just a few years earlier, had led directly to her being deposed as leader of the Labour MSPs.


After half a year of soul-searching and brow-beating the unionist parties each tried to come to terms with their respective defeats and searched among their remaining Scottish parliamentarians for new leaders of their North British franchises. As anyone with a vestige of talent had long ago headed straight for Westminster, each of the three parties found they were fishing in a very small gene pool, and their respective choice of leaders was consequently uninspiring.


The start of 2012 saw the reaction to this as senior figures from the London headquarters of the unionist parties ventured North of the border to knock this independence nonsense on the head. We learned that the anti-independence campaign was being led by a gang-of-four in the cabinet, with Gideon Osbourne as its chief strategist.


Expert witnesses of impeccable loyalty were questioned by a special Select Committee on Separation for Scotland and each was asked to provide 10 reasons why Scotland would be bankrupt within a year of independence, then to describe the exact species of grass that all Scots would soon be forced to eat. Most winesses dutifully complied, demonstrating to everyone in Westminster what a thoroughly silly idea separation was and reassuring themselves that it would never, ever happen.


Then the Yes campaign was launched and suddenly it was not just the SNP who were backing the call for independence. Other parties, including the Greens and SSP, joined the campaign along with people from all walks of life who were not politicians or even political. Notably, a number of the more visible Yes campaigners were ex members of other political parties, who had become convinced of the need for Scottish self-determination. 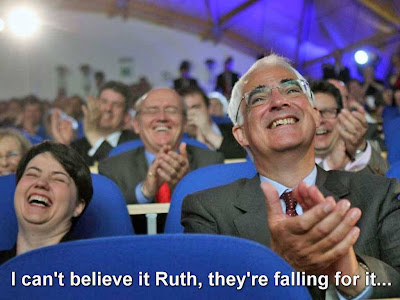 The unionists fought back briefly with the launch of their “better together” campaign, which stressed that the positive campaign for the union was that Scots should “be afraid, be very afraid”. Disgraced former chancellor Alistair darling told us that there was now incontrovertible scientific proof that Scotland was “too wee, too poor and too stupid” to be trusted to look after its own affairs.


This campaign became silent, however, when it emerged that it was being fronted by an ex Labour politican, quickly dubbed “The Abominable No Man” by independent MSP Margo Macdonald, but was bankrolled by a Conservative dining club in London with most of the contributors being City bankers. Alistair Darling became silent when he was pulled into the LIBOR fixing scandal which had happened while he was Chancellor and the No campaign curled up in the foetal position and waited for a figurative Summer to come.


Then something quite strange began to happen. Members of all the unionist parties began asking why their leadership were so adamantly opposed to independence. Was this for the benefit of the people or the party. Was it even for the benefit of the party in Scotland, or that in London? And, in any case, who decided that Scottish independence was something to be fought at every opportunity?

Polls began to show that not all SNP members supported independence, and not all members of the unionist Troica were opposed to it. The party lines were becoming ever more transparent on this issue. Additionally, members of Labour and the Lib Dems were becoming increasingly concerned at the prospect of sharing a platform and a campaign with the hated Tories.


Labour's roots were firmly embedded in home rule, and it was under their watch that the Scottish Parliament was finally re-established. The Liberal bit of the Lib Dems had long been a federalist party, and had also been great supporters of home rule. Even the Tories, formed from the ashes of the Scottish Unionist Party, had almost elected a leader who proposed breaking links with The London party and re-branding the Scottish right.


Recently, web sites and Facebook groups have begun to emerge in support of those members of the No parties, disaffected or not, who are in favour of Scottish independence or who simply believe that more powers should be vested in the Scottish Parliament. This is a new phenomenon and may provide an inkling of how the referendum vote will be manifested.


Perhaps the most notable of these movements is the Voters Alliance for an Independent Scotland (VASI), which provides a platform for members of all parties to campaign for a yes vote, along with others of no political persuasion. Through VASI, emerging groups within the various political parties are beginning to find common cause with one another. Expect this to be a growing trend.


Articles in the Scotsman and Herald have highlighted one of these groups, Labour for Independence, and both papers try to dismiss it's significance by painting it as a crowd of SNP activists egging on a few misguided Labour members. However, the movement behind this and other sites is real, and represents a genuine grass roots campaign, which the leadership of the unionist parties will ignore at their peril.


Labour for Independence features an interview with Yes Scotland chief executive Blair Jenkins in which he states: "We know there are many voters, of all political persuasions and none, who support an independent Scotland. In fact, the principle of independence for Scotland is above and beyond any party political interests.


"It's the people's referendum. Whether people support Labour, the Conservatives, the SNP, the Greens or any other party, there are many who are attracted by the possibilities that independence offers to build and shape the kind of society that is in line with their core beliefs and values.


"Another major plus side of independence is the prospect of the best of the talent from the various parties serving at Holyrood rather than Westminster." 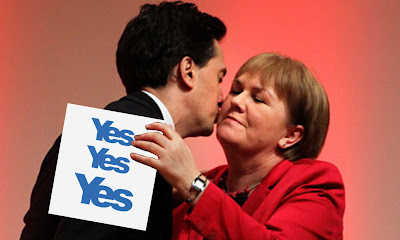 While it is (almost) unthinkable that the Scottish Labour leadership would suddenly embrace independence, controlled as they are from the main party in London, they will need to head off the Yay-sayers in their own ranks to have any hope of securing a No vote in 2014. A great many of the undecided section of Scottish voters are supporters or recent deserters of Labour and the Lib Dems. They will be targeted by the Yes campaign and are ready to be persuaded.


Whatever happens in the immediate wake of the referendum, a Yes vote is not a vote for an SNP government. Each of the parties currently active in Scottish politics will continue, albeit in an altered form, after a Yes vote. There may be a realignment, and new parties may well form to close any gaps which appear, but the SNP will be just one of a number of Scottish parties.


Many members of the three unionist parties are now beginning to see the opportunities which exist to shape Scottish society, once the government and their party hierarchy, are free from London diktat. In the case of Labour and the Lib Dems, this may be the only opportunity for them to progress true social democracy. For the Tories, it is a chance to emerge from the ugly chrysalis of Thatcherism.


There is an opportunity for the Labour and Lib Dems, over the next few months, to come up with a defined set of powers which will be on offer in the event of a No vote, and to demonstrate a mechanism by which these can be delivered. This mechanism must be one the people of Scotland can trust absolutely; we have been betrayed by Labour and Tories in 1979, and the Lib Dem record in coalition is hardly reassuring.


But an opportunity exists to redefine the status quo as something a majority of Scots may be able to support. The window of opportunity is brief, and the trust of the people will be difficult to capture, but it could be done.


If the unionists fail to grasp this particular thistle, and experience strongly suggests that they will fail to do so, then the independence debate risks being polarised so that many of their members and supporters will vote Yes. Whether the numbers are sufficient to achieve a majority, we will need to wait and see.