The only way is Ethics 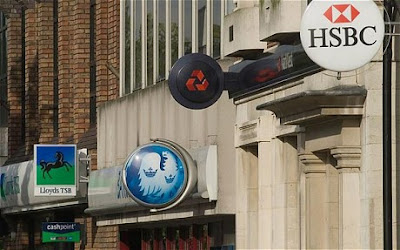 Recent revelations of corrupt practices in the financial service sector are eroding even further public respect and trust for the organs of state. The combination of government collusion and incompetence which is also coming to light only serves to exacerbate this process.

Over the last fortnight we have discovered the fiddling of the Libor rates by at least 20 international banks, apparently with the knowledge (and inaction) of the Bank of England and treasury. This was combined with the admission that interest rate swaps had been mis-sold to small and medium businesses to the extent that many had been forced out of business, at the same time as the banks were deliberately failing to meet business lending targets.

Now details are emerging of billions of pounds of international money laundering which was carried out by those very same banks, where money from the sale of illegal drugs and from Iranian sanction busting activities was illegally “cleaned up” by hiding the origin of the transactions concerned. No doubt there will be many more such stories of unethical and illegal practices as the onion layers continue to be peeled back.

In most of these cases, the main culprits are emerging as London-based international banks, particularly their “investment” arms, and the various regulatory bodies based in the City along with their political masters. The financial sector and the UK government seem to operate in a clubby atmosphere where almost anything is permissible as long as no-one is caught out.

While this is hugely damaging to the economy and reputation of the whole of the UK, and is sure to lengthen, if not deepen, the current financial crisis, it actually represents a wonderful opportunity for an Independent Scotland.

Scotland, too, has a very significant financial sector - actually one of the most important in Europe - for all that it is constantly overshadowed by its larger sister in London. Before the crash of 2008, the Scottish industry had a reputation for efficiency, honesty and probity, but was viewed as a little dull.

Even the troubled HBOS and RBS were mainly the preserve of the City of London. HBOS in 2008 was run entirely from outside Scotland, with much less than 10% of its activity being generated in Scotland. In the case of RBS, much decision making was taken in the Edinburgh headquarters but, again, considerably less that 1/10 of the bank's activity was based in Scotland.


Despite attempts by UK government and political parties, along with a pliant media sector, to place the blame for the banking crisis in Edinburgh, the reality is that the problems which led to the crisis were made in London and New York. Light-fingered banking practice and light-touch regulation were the two parents of the crash.

The culture within the Scottish sector is much less tainted than that in London. RBS aside, Scottish-based financial institutions continue to have a superior reputation than their Southern counterparts. This tends to escape the public attention due to their being fed a constant diet of London scandal, and there is a real risk that the reputations of Scottish firms could be damaged by association.

Additionally, the Scottish Government was set up to be much more open and transparent than Westminster and, to a large extent, this has been achieved. It is also largely free of the medieval, and often corrupting, traditions and conventions which plague the UK parliament and civil service, and which are proving all but impossible to change in any meaningful way.

The people of Scotland, at least, are far more likely to trust the Scottish than the UK Government to look after their affairs.

And it is those two factors, the reputation of the Scottish financial sector, and the openness and competence of the Scottish government, which together provide the opportunity post-independence.

When, as it must, the backlash against the City of London occurs, international capital will begin to search for two things:

The first is a properly regulated and vibrant financial centre with a very different reputation from the City of London.


The second is a financial centre which is as much like the City in every other way. That is, in language, currency, infrastructure, geography and culture it should be as close as possible to the City in order to minimise the shock (and cost) of the new.

As a small country, Scotland does not need to capture much of the business which will flee from London, in order to benefit substantially. If we were to gain around 5% of the business currently transacted from London, our financial sector would double in volume. Even a small proportion of this would be hugely beneficial to the Scottish economy.

However, there are two key factors that need to be in place for this to work, and these can only be obtained through full independence.

There must be a demonstrably effective scheme of banking regulation in place, which is not subcontracted to Westminster, and which can ensure a continued ethical culture in the Scottish sector. This requires a change in SNP policy if this is to be managed within a currency union or Sterling zone, as current policy is to leave bank regulation with Westminster and the Bank of England.


There also needs to be a constitutional guarantee that future governments will not be able to reduce or remove this regulatory safety net for political or commercial ends. This would need to be added to a written constitution, which itself must be a priority for the first independent administration. It is largely the lack of such guarantees at Westminster which has allowed such outrageous levels of abuse to occur over recent decades.

While the SNP will not form a government in perpetuity after independence, despite the apparent belief of the unionist parties, they will be in control as independence negotiations take place and while new Scottish institutions are established along with the legal framework which will underpin them.

It is, therefore, essential that the SNP's upcoming policy white paper establishes the type of environment within which Scotland can take full advantage of such opportunities, while guaranteeing an efficient and ethical future for both the government and the economy of our new independent nation.